It was a successful opening event for OTK drivers and teams at the United States Pro Kart Series Southern Grand Prix. The opening two rounds of the 2022 championship program was hosted at the Orlando Kart Center, just minutes for the home base of OTK USA in Orlando, Florida. Picture perfect weather greeted the over 300 drivers in the seven categories where OTK competitors collected over half the victories for the two days of racing. In total, OTK drivers earned nine wins, 26 podium finishes and 42 top-five results. 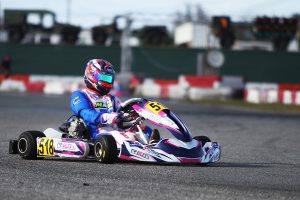 Danillo Ramalho doubled up in the X30 Masters class for his first USPKS victories (Photo: eKartingNews.com) 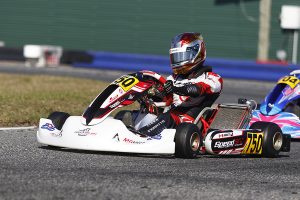 Ayden Ingratta put himself on top of the podium in the X30 Junior division in Round Two (Photo: eKartingNews.com)

Two drivers were able to split the wins in the X30 Junior category for OTK. Caleb Gafrarar (Rolison Performance Group / Kosmic) was able to secure victory on Saturday with a last lap maneuver over Ayden Ingratta (Speed Concepts Racing / Redspeed). Leonardo Escorpioni (Zanella Racing / Tony Kart) drove to his first USPKS podium in third with Christian Miles (Mike Doty Racing / LN) placing fifth. It was the same two at the front, this time with Ingratta pulling off the last lap pace for the victory over Gafrarar. Escorpioni held his spot in third with Teddy Musella (Rolison Performance Group / Kosmic) in fifth.

Throughout the weekend the KA100 Senior category saw intense racing with many OTK drivers toward the front of the field. Scoring victory in the Sunday round of action was Alex Stanfield (GWR / Tony Kart), pulling out the win in a final corner pass. Aaron Benoit (URace / Tony Kart) ended up third with Gia Cicero (Rolison Performance Group / Kosmic) in fifth. Jeremy Fletcher (GWR / Tony Kart) was among those in contention on Sunday until contact prior to the white flag took him out of contention. Fletcher led the OTK contingent on Saturday, placing third ahead of Alex Dancho (Mike Doty Racing / LN) with Stanfield completing the top-five. 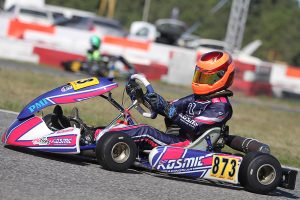 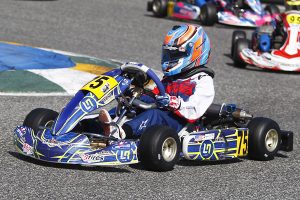 Marco Summut gave LN Racing Kart its first victory at the USPKS, winning Round One in Micro Swift (Photo: eKartingNews.com)

The second event of the 2022 United States Pro Kart Series is slated for the April 29-May 1 weekend at the popular GoPro Motorplex in Mooresville, North Carolina. Rounds Three and Four of the championship program will be contested in Race City USA'.