The Superkarts! USA Pro Tour completed the 2021 season on the August 13-15 weekend with the 11th running of the SummerNationals, held at the New Castle Motorsports Park. OTK USA competitors and race teams converged on the New Castle, Indiana facility for the final two rounds of the championship program, leaving with great success. OTK recorded 10 victories, 27 podium results, and 42 top-five finishes to end the series with five class championships. 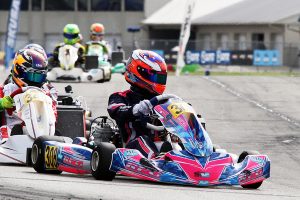 The KA100 Senior division welcomed two new winners on the SKUSA Pro Tour, both aboard OTK product. Austin Garrison (Rolison Performance Group / Kosmic) drove to victory in his class debut. Thomas Annunziata (Mike Doty Racing / Kosmic) joined him on the podium in third with Cole Morgan (Ryan Perry Motorsport / Tony Kart) fourth. Annunziata added his name to the list of winners on the year with victory on Sunday. Garrison was a few inches off for second-place in a photo finish. Nolan Allison (Rolison Performance Group / Kosmic) drove to fourth with Peyton Phillips (Core Karting / Redspeed) in the fifth position. Morgan's performance on Saturday gained him enough of an advantage to secure his first SKUSA Pro Tour championship with Allison ending the season in the third position for OTK drivers.

It was a repeat performance for Carson Morgan (Ryan Perry Motorsport / Tony Kart) in both X30 Junior and KA100 Junior, recording two championships in 2021 thanks to four victories at the SummerNationals. Morgan opened up the weekend with his first win in KA100 Junior on Saturday, leading an OTK top-five. Jeremy Fletcher (Team Felon / Tony Kart) was runner-up with Austin Jurs (Franklin Motorsports / Redspeed) joining them in third. Jesus Vasquez Jr. (Nash Motorsportz / EOS) and Chase Hand (Rolison Performance Group / Kosmic) completed the top-five. Morgan returned the next day, securing his third victory on the season. Fletcher was runner-up once again with Noah Baker (Supertune / Tony Kart) in third and Cooper Shipman (Iron Rock Motorsports / Tony Kart) in fifth. Morgan was joined on the championship podium with Baker and Jurs for an OTK 1-2-3. 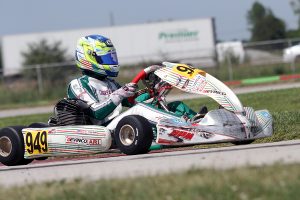 It was a similar story in the X30 Junior class all weekend with Morgan at the front. He was named winner after the race was completed due to a penalty, moving him to the top step of the podium. Baker finished third with provisional winner Kai Sorensen (Supertune / Tony Kart) put to fifth-place. Morgan secured his third victory of the season on Sunday to lock up the championship. Fletcher was third with Logan Toke (Ryan Perry Motorsport / Tony Kart) and Cole Kleck (Arcane / Redspeed) completing the top-five. Joining Morgan on the championship podium was Fletcher with a third place in the final standings.

Needing a perfect weekend to secure the championship, Mario Barrios (Rolison Performance Group / Kosmic) did as necessary. Barrios was able to secure a sweep on Saturday, complete with a photo finish for the main event. He returned the following day to accomplish the perfect score, recording his second and third career SKUSA Pro Tour victories along with his first series championship. Privateer Krishna Bhat (EOS) drove to fourth on Saturday and recorded his first podium on Sunday in the third position. 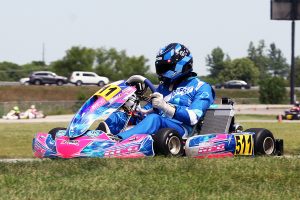 The Iliffe brothers led the way for OTK in the Mini Swift division. Oscar Iliffe (Iron Rock Motorsports / Tony Kart) was able to record two runner-up finishes on the weekend while brother Jack Iliffe (Iron Rock Motorsports / Tony Kart) finished in third both days. Jack was able to close out the season second in the championship standings with Oscar moving up to third in the points thanks to his SummerNationals weekend.

Two drivers finished inside the top-five on the weekend in the Micro Swift for Rolison Performance Group. Jackson Gibson (Kosmic) stood on the podium for the first time on the SKUSA Pro Tour in third while teammate Augustus Toniolo (Kosmic) was fourth. The following day, Toniolo was battling for the championship title, driving to fifth in the Final, coming up just short in his bid for the title to end up as vice-champion for the 2021 season.